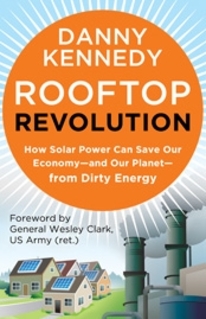 Rooftop Revolution: How Solar Power Can Save Our Economy - and Our Planet - from Dirty Energy

By Danny Kennedy, founder of Sungevity

San Francisco, CA -- There’s "sun" potential on the horizon, and the only obstacle to tapping its power is our ignorance. With ROOFTOP REVOLUTION (Berrett-Koehler, September 2012), solar pioneer Danny Kennedy has written a rallying cry for the solar industry and policy makers to change the way we see the sun as a viable energy source.

While Solar power’s detractors have been proclaiming that the collapse of solar panel manufacturer Solyndra proves solar is just a hippie pipe dream, Kennedy points out that Solyndra’s downfall actually proves the opposite: the company failed because it wasn’t able to compete in a red-hot industry, not because solar isn’t ready for prime time. In this succinct, hard-hitting book, Kennedy proves that solar can save money, create jobs, and protect the environment - and only politics and perception stand in its way.

You don’t have to be an energy expert to see how strong the case for solar power is:

Powerful forces are still arrayed against solar power. America need a rooftop revolution to break the entrenched power of the coal, oil, nuclear, and natural gas industries (which Kennedy calls King CONG) and their bought-and-paid-for allies.

Kennedy systematically refutes the lies spread by CONG - that solar is expensive, inefficient, and unreliable; that it is kept alive only by subsidies; that it can’t be scaled up; and many other untruths - and shows that the solar industry can become a far greater source of jobs than it already is. Praising the pioneers who are pushing solar forward, Kennedy also decries the rampant political pandering that keeps us dependent on dirty and dangerous forms of energy. Now is the time to move away from the declining sources of the past and unleash the unlimited potential of the sun.

Danny Kennedy founded the leading residential solar power company, Sungevity, in 2007, as an integral part of his life’s mission to promote the use of clean energy and eliminate the world’s dependence on fossil fuel. He is president of the company, serves on its board of directors and oversees government relations and community engagement programs.

Kennedy has worked on climate and energy issues for over two decades. Prior to starting Sungevity, he served as a campaign manager for Greenpeace Australia Pacific. In the US, Kennedy ran Greenpeace’s California Clean Energy Campaign in 2001-02, which helped create the state’s current Solar Initiative providing substantial market support and helping many citizens go solar.

He was recently named 2011 “Innovator of the Year” by PBS’ program, Planet Forward, for providing an innovative, high-impact and commercially viable solution that responds to the world’s environmental challenges. He was profiled in the New York Times Magazine in August 2012, which you can read here. He lives in Oakland, CA.