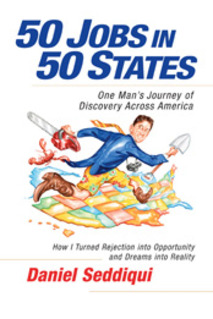 San Francisco, CA - Like many college grads, Daniel Seddiqui had a hard time finding a job after college. Despite facing over forty rejections from potential employers, he knew there had to be an opportunity for him out there somewhere. So he set out on an extraordinary adventure that led him to discover the many industries, opportunities, and cultures America has to offer. He recounts the journey in his book, 50 Jobs in 50 States: One Man’s Journey of Discovery Across America (Berrett-Koehler; March 2011; $15.95; ISBN 978-1-60509-825-9).

Before embarking on his trip, Daniel decided that he wasn’t going to pursue just any job. His goal was not only to explore different careers, but also to explore the country - so he sought jobs that reflected the culture and economy of each state. Working with the quintessential profession of each state, he received an authentic taste of what America was truly about.

Daniel tried everything: he became a cheese maker in Wisconsin, a border patrol agent in Arizona, a meatpacker in Kansas, and a surfing instructor in Hawaii. In 50 Jobs in 50 States , he chronicles all aspects of his journey - from adapting to the unique demands of every job and the wildly differing cultures and environments, to his personal introspection and self-growth along the way.

Throughout his quest, Daniel ate his first corn on the cob, shot his first gun, and worked side by side with authentic Amish folks. He met people who were willing to give him a job based on no prior experience, and formed friendships with locals who were eager to hear his stories and share their own. In every state, he encountered people who faced the same predicament he was in, from students anxious about choosing the right major in college to mid-career professionals struggling to make a career change in a bleak economy. By sharing his story, Daniel inspired others to redefine their understanding of a traditional career trajectory.

By the end of his journey, Daniel had more than just an impressive resume  - he had also acquired scores of new friends, a new perspective on American culture, and the tools to overcome just about any obstacle. By remaining persistent, using his networks, taking some calculated risks, and readily adapting to whatever life threw at him, he endured a year of vastly unique experiences, never quite knowing what the next week would bring.

Daniel Seddiqui has been featured on CNN, ABC, NPR, the BBC, The Houston Chronicle, The New York Daily News, and many other places. Daniel is currently on national book tour, speaking at high schools, colleges, senior centers, rotary clubs and bookstores. He is writing about his journey reprise on his website, www.fiftyjobs.com . Follow him on Twitter @danielseddiqui and find him on Facebook.com/fiftyjobs.