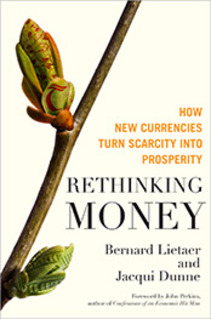 “This stunning book should be required reading for every person who wants a world that works and a sustainable future for all of life.” ~ Lynne Twist, Author of The Soul of Money

"An instant classic! Lietaer and Dunne explain how and why our monetary system fails. They then ask what else is possible and provide the fundamental reframing needed to bring biodiversity to our present monetary monoculture." ~ Edgar Cahn, founder of TimeBanking and a cofounder of the National Legal Services

"Living now in a time of whole system transition, the re-thinking of money is possibly one of the most important things we have to do, and at this, the authors succeed brilliantly." ~ Jean Houston, PhD author of Jump Time and A Passion for the Possible

"Hallelujah! Finally there's an interesting book for the layperson about what money really is, why it causes so much trouble, and what we can do about it." ~ Dr. Paul H. Ray Co-author of The Cultural Creatives: How 50 Million People Are Changing the World

By Bernard Lietaer and Jacqui Dunne

The single most important economic discussion of our time is one that we have yet to address - and it may be killing us. As the United States staggers through “the Great Recession” and the economies of Europe suffer and are near collapse, we continue to view the world through the outdated monetary prism that assumes we need to do everything with a single scarce currency.

An outdated monetary system is unwittingly destroying societies around the world and it’s time to rethink it, says international monetary expert Bernard Lietaer and award-winning journalist Jacqui Dunne, visionary authors of RETHINKING MONEY: How New Currencies Turn Scarcity into Prosperity (Berrett-Kohler; February 4, 2013; $27.95). Using scientific proof they explain why the monoculture of a single type of currency is a root cause of the financial instabilities that have manifested throughout modern history. It’s time to lift the veil in order to explain our unexamined money system built on bank debt that perpetuates scarcity and greed. “It is possible to realize that there are thousands of other ways to escape the existing financial morass. We can actually attain sufficiency and reach the inherent human goals of cooperation, community and even contentment,” say the authors.

A large part of the answer lies in cooperative currencies. Through real-world examples the authors explain how thousands of communities across the globe are reassessing and re-engineering money with astonishing results. These strategies do not replace the conventional monetary system, but work in parallel with it, providing new options and resources that promote sustainable abundance and cooperation. In fact, since 1980 the number of cooperative currencies has increased from a mere handful to more than 4,000 mature systems today.

In RETHINKING MONEY, Lietaer and Dunne show us a new way to think about money by examining:

The results could be revolutionary. Poverty would be dramatically reduced, the vulnerable cared for, healthcare available for all, cities and towns revitalized, financially strapped businesses and governments would have new sources of liquidity. As new currencies are designed and circulated, innovative methods of earning a living emerge that may not have existed before. Consequently, “by rethinking money it is possible to enjoy even more than a period of prosperity but a new era of genuine sustainable abundance.”

BERNARD LIETAER is an international expert in the design and implementation of currency systems. He co-designed and implemented the convergence mechanism to the single European currency system (the Euro) and served as president of the Electronic Payment System at the National Bank of Belgium (the Belgian Central Bank). He has studied and worked in the field of money for more than 30 years in an unusually broad range of capacities including as a Central Banker, a fund manager, a university professor, and a consultant to governments in numerous countries, multinational corporations, and community organizations. He co-founded and managed GaiaCorp, a top performing currency fund whose profits funded investments in environmental projects. A former professor of International Finance at the University of Louvain, he is currently a Research Fellow at the Center for Sustainable Resources of the University of California at Berkeley.

Jacqui Dunne is an award-winning journalist from Ireland, founder and CEO of Danu Resource, and an emerging leader in helping entrepreneurs develop technologies and initiatives that restore the earth's equilibrium globally. The company serves as a fiscal agent for funding, and works as the interface between the donors and the projects. Danu’s unique value is its ability to work from a future reference point that draws out the greatness, and builds upon the strengths, of both the donor and the recipient, thus creating a flourishing paradigm shift for a quadruple bottom-line - people, planet, profits and power within.