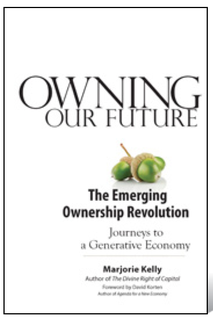 New Book Explains How a New Worldview and Economy Is Emerging With Values Like Sustainability, Community, Sufficiency, and Fairness

Foreword by David Korten, Author of Agenda for a New Economy

“ This is one of the most important books of our time. I found it so informative and inspiring that reading it literally brought tears of joy to my eyes. It gets my highest recommendation.” -- David Korten

Most of the great political struggles of the past 5,000 years can be reduced to a simple question: who will own land, water, and other essentials of living - and to what end?

Looking around at the wreckage left in the wake of the world economy's latest crisis, veteran business journalist Marjorie Kelly noticed that some institutions were left relatively unscathed. What did they have in common? The key, Kelly realized, is seemingly obscure: ownership. Prominent among the survivors were organizations that combined the flexibility of traditional private ownership with a focus on the common good.

As long as businesses are set up to focus exclusively on maximizing quarterly returns for a limited group of individuals, the economy will be plagued by destructive boom-bust cycles. But now people are experimenting with new forms of ownership. We are in the midst of the most creative period of economic innovation since the dawn of the Industrial Revolution. Kelly calls these new forms generative : aimed at creating the conditions for life for many generations to come. They are in contrast to the dominant ownership designs of today, which can be called extractive: aimed at extracting short-term financial wealth.

To understand these emerging ownership alternatives, Kelly reports from all over the world, visiting a community-owned wind facility in Massachusetts, a lobster cooperative in Maine, a multibillion-dollar employee-owned department-store chain in London, a foundation-owned pharmaceutical in Denmark, a farmer-owned dairy in Wisconsin, and other places where an economy that works for all is being built.

This is not a moment for old solutions and tired approaches. As we enter a new era of limits, alternative ownership designs can help it become an era of fairness, sustainability, and community.

Marjorie Kelly is cofounder of Corporation 20/20, an initiative to chart the future of responsible enterprise, and is on the senior staff of the Tellus Institute, a Boston think tank. She is the author of The Divine Right of Capital and was cofounder and editor of Business Ethics magazine.

The Divine Right of Capital