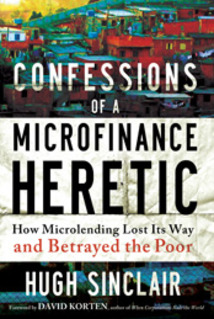 How did you get involved in microfinance?

Explain how microfinance works, both in theory and in practice.

Microfinance has some very prominent endorsers, including the Clintons, Queen Rania, and Natalie Portman. Why do you think microfinance appeals to so many people?

What are some of the common misconceptions that people in developed countries have about microfinance and what it does to help the poor?

When did you first discover something was awry? What did you do about it? How did your managers react when you presented them with your findings?

Of the questionable organizations, who are the biggest players and what have they done wrong? How much money is being made at the expense of the poor, not to mention dubious investors?

Tell listeners what happened in Nicaragua, where there was a civil uprising about the loans.

What happened in India with SKS?

What do you think the underlying problem is with microfinance? Will the problems go away if we get regulators to do a better job or if the microfinance funds conduct proper due diligence?

Explain what role Muhammed Yunnus, whom some credit with inventing the industry, plays in your discoveries about LAPO. If he is aware of the high interest being charged to borrowers, why doesn’t he condemn the investments?

Reading the book, one could become quite cynical about the entire sector. You mention towards the end of the book that microfinance can work and that eliminating it completely would be to the detriment of many poor people, a la ‚“Don’t throw the baby out with the bathwater.” Explain this.

Kiva is probably the most popular microlending organization in the U.S. They have invested about $280 million dollar in microfinance - not very much compared to the overall $70 billion industry, but their popularity is growing. You have questioned the effectiveness of Kiva with disappointing results -- can you tell us a little about that?

What advice would you give someone who has invested money in a microfinance fund?