About the Authors | Enough is Enough 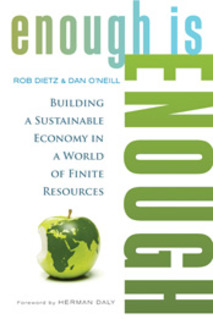 About the Authors of Enough is Enough

Rob Dietz is the editor of the Daly News, an online publication named in honor of the visionary economist Herman Daly.

He grew up in the suburbs of Atlanta during the 1970s and 80s, immersed in the culture of consumerism. By the time he finished college, he knew that he'd have trouble following the rules of this culture (buy, buy, buy, work, work, work). His career has consequently taken some unusual turns.

He started out as an economist, trying (and failing) to use economic tools to solve environmental problems. He reinvented himself as a scientist and geographer, working for the U.S. government to support the conservation of wildlife and habitat. He then switched to activism, serving as the first executive director of CASSE (the Center for the Advancement of the Steady State Economy), a nonprofit organization with an aim of advancing a sustainable economic agenda.

Dan O'Neill is a lecturer in ecological economics at the University of Leeds, and the chief economist at CASSE. His research focuses on the changes that would be needed to achieve a successful non-growing economy, and alternative ways of measuring progress besides GDP.

Dan has worked in both the public and private sectors in areas such as regional planning and energy management. He holds a doctorate in ecological economics from the University of Leeds, and a master of environmental studies degree from Dalhousie University.