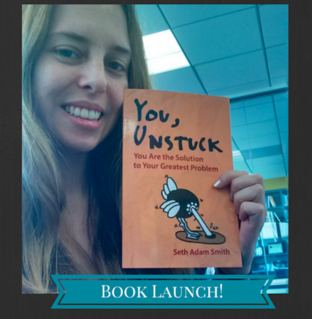 Confessions has an exciting announcement this week! My first acquisition will be launching soon over at SethAdamSmith.com, and, on top of that, I just got approval to present my next book to our company. So, I am quite pleased about how 2015 is shaping up. It occurred to me that this blog has focused heavily on what goes into getting approval, but has not yet ventured into the mysteries and vagaries of how a book becomes a book. Since Seth’s book is launching this week, I thought it would be fun to reflect on the journey of this book, from concept to press.

I am so immensely proud of this project. This is Seth’s second book with BK- the first being Your Life Isn’t for You. You, Unstuck was, in fact, originally a chapter in Your Life. As Seth wrote it, the chapter grew and grew, until it became clear that the chapter itself no longer belonged in the book, but had become its own book. This is actually a frequent occurrence, and is similar to the phenomena in fiction when authors will say that a character took on a life of its own, and did what it wanted, even if contrary to the author’s wishes. So Seth took the chapter out and pitched it to it as an eShort. I was very excited about the topic, and of course by Seth’s signature style of melding stories from history, current day, all surrounding a message the resonates across time and culture. (His blog posts have been translated by enthusiastic readers into over 40 languages) eShorts are a new realm for BK though, so I had some convincing to do to get it through our rigorous approval process.

eShorts are having their moment. The concept of “book” is being reimagined as distribution and formatting possibilities expand. Digital platforms allow for shorter works to be published and sold easily. Whereas historically, books needed to be long enough that a spine would be visible with legible text on a bookstore bookshelf, most people now do their book purchasing online. You, Unstuck was the perfect length for an eShort, and the author has a truly spectacular online following. Considering the largely digital nature of his platform, we decided that this was a perfect opportunity for us to experiment with the medium of a digital eShort.

I am going to let you in on a little industry secret: producing a short digital book is actually not that much less expensive for a publisher than a traditional book. Shocker, right? Well, consider that we still have to pay for overhead- the lights, our rent, our internet and server, etc. In order to produce the high quality work we are known for, we still have to pay staff editors and copyeditors, cover designers, and producers. When someone self-publishes on amazon, they are still paying “overhead” in the form of their own living space and time. If you want to self pub a high quality book, the expense for all the things I mentioned comes out of the author’s pocket- so the self pub author is making a greater investment in their own product. One of the things we can do, as a traditional publisher, however, is to release a professionally produced print product as well. We have released You, Unstuck as a digital short, but if you are just not that into digital books, you can also buy a beautifully type-set, paperback copy of the book. You can see a picture of me gleefully holding the advance copy in our office above.

SO, what is this book about?

You, Unstuck is about a moment. It is a moment many people struggling with depression and loss, or even just a rough patch in life know well. It is the moment where you cross over from powerlessness to powerful- in fact, the working title of the book was From Victim to Victor. When you are battling depression, there is this huge abyss that you have to stare into, and on the other side, visible but inaccessible, is the land of emotional stability and happiness. The chasm seems insurmountable, but everyone keeps telling you that it is somehow in your power to make it across, but no one tells you how. You, Unstuck tackles this moment, using stories of people who have done it, people who have even used that moment to propel them to the heights of success. Ultimately, the book helps you to reframe how you see your circumstances so you become aware of the tools you already have to build some sort of bridge to the other side. It was an extraordinary first book to work on, and I am so thrilled to get it out into the world! (You can check it out here!)

Anna - Thank you for explaining the publishing costs that every book incurs, whether it's print, digital, or both. Many people just think of the variable printing and physical distribution costs, but that;s a small piece of the total pie. But since we haven't published a Primary Digital titles in a while (Dignity for All in 2008 was one of our last), what made You, Unstuck uniquely suited to being a primary digtal book with a print-on-demand option? Was it price? I see that it lists for $9.99 on our website, but since we give 30% to our members, it's only $6.99. On Amazon Kindle, I see it selling for $2.51. Or is it page length?  It's only 56 pages, whereas most of our books are at least 100 pages. Or is it the way the author or Berrett-Koehler intend to market it. I'm in the business myself but my thinking is still evolving on this. Thanks in advance.  David

I still think a lower investment model is possible, it's just a hard adjustment for publishing professionals to make...

Charlotte, I think it is defintely true that we can make a shorter book much less expensively, but it is the overhead that really hobbles us.  When doing the P&L for this book it looks wildly successful until the overhead was calculated, and that comepletely undermined it.  We had to work hard to prove that this book could be a success with such a low digital price point, even though we we able to bring other regular costs down in various ways.

David- this experiment was a go because the author has an enormous online following- instead of traveling and speaking in person, he has a blog that generally gets 100,000 views of each artical he posts. HIs audience is already digitally based, and hopefully more inclined toward a digital product. If even a fraction of his readers choose to buy the book, it will not be a loss for us. The idea behind eShorts in general is that the price point is so low you generally sell more copies.  Large digital readership + easy purchasing decision hopefully = more sales, justifying the lower cost.