Pride (No Prejudice) – Celebrating LGBT+ Authors and Their Works 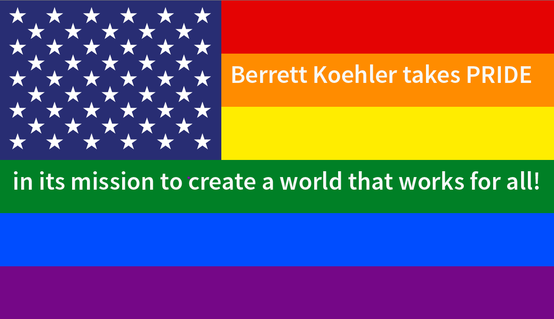 Many literary celebrities through time have also been part of the LGBT+ community. These 8 authors have significantly shaped their readers’ thinking and have made history with their writing. Let us celebrate their contributions, especially during the 2015 SF Pride weekend.

“Betrayal and apparent failure are the fate of all revolutions; if only in that compromises are inevitable and expectations frustrated.”
-The Stonewall Experiment

Ian Young is a pioneer in LGBT literature. A journalist, bibliographer, and nonfiction writer, he wrote regular columns for The Body Politic, he edited the anthology The Gay Muse, and he penned The Stonewall Experiment. He also founded the first Canadian gay publishing house Catalyst Press – the idea of a small publisher for social progress resonates with us at Berrett-Koehler!

Sappho, an ancient Greek lyric poet from the 7th century BCE, is a pioneer of queer literature. Born on the island Lesbos (the origin of the word “lesbian”), she was an aristocrat and spent her days studying the arts. Much of her poetry centers on themes of love and passion for both men and women. She is one of few respected female writers from the ancient Greek tradition.

“You will always be fond of me. I represent to you all the sins you never had the courage to commit.”
-The Picture of Dorian Gray

Oscar Wilde is perhaps most famous for his novel The Picture of Dorian Gray and his play The Importance of Being Earnest. He was well known during his life in the late 1800s for his witty style and loud fashion. After a failed libel trial against the Marquess of Queensbury – who had written a note to him saying “For Oscar Wilde, posing somdomite” – Wilde himself was arrested for sodomy and gross indecency.

“It may be normal, darling; but I’d rather be natural.”
-Breakfast at Tiffany’s

Truman Capote is most renowned for his pioneering “nonfiction novel” In Cold Blood, his recount of a Kansas murder, along with the novella Breakfast at Tiffany’s. He was openly gay, and spent most of his life with Jack Dunphy, also a writer, as his partner. He also penned the nonfiction work The Muses Are Heard about The Everyman’s Opera’s journey to the USSR and Music for Chameleons, a fiction and nonfiction blend.

“Perfect purity is possible if you turn your life into a line of poetry written with a splash of blood.”
-Runaway Horses

Yukio Mishima (Kimitake Hiraoka) is one of the most important Japanese authors of the 20th century famous for his avant-garde style, including contemporary versions of Kabuki dramas. One of his novels Confessions of a Mask is semi-autobiographical and follows a young homosexual man who hides behind a mask to be accepted. Other works also focus on sexuality, along with political themes and ideas about death. A radical right-winger, he committed seppuku after a spoiled coup d’etat.

“Everything is holy! everybody’s holy! everywhere is/holy! everyday is in eternity! Everyman’s an/ angel!/ The bum’s as holy as the seraphim! The madman is/ holy as you my soul are holy!”
-Howl and Other Poems

Allen Ginsberg of the Beat Generation helped lead the literary renaissance in San Francisco. He is a controversial figure for denouncing capitalism, materialism, traditionalism, and war in poems like America. City Lights Bookshop published his most famous poem "Howl" in Howl and Other Poems. It was briefly banned for obscenity due to its autobiographical openness with homosexual relations, especially with his lifelong partner Peter Orlovsky; sodomy laws were still in effect during the 1950s. However, the judge ruled against the ban. Since then, Ginsberg has become a major symbol of counterculture.

“Everything want to be loved. Us sing and dance and holler, just trying to be loved.”
-The Color Purple

Alice Walker is a prolific author born during the Jim Crow Deep South. Her most famous work The Color Purple explores the challenges that black women in American society face, especially violence, poverty, and poor social standing. For a time, Walker was married to Melvyn Leventhal and they were the first to openly defy Mississippi’s anti-miscegenation laws. After her divorce, she dated both men and women, most famously the singer Tracy Chapman. She calls herself “curious”.

Leslea Newman, a current American writer, is Jewish, feminist, and lesbian, and many themes of her writing focus on those identities. Her pioneering 1989 children’s book Heather Has Two Mommies received backlash and frequent bans, although it has been a hit with young children who love the idea that all families are “normal.” A senator from my home state of North Carolina even read it on the senate floor to try and pass an amendment blocking federal aid to school districts that promote homosexuality, oh-so-cleverly dubbed the “no promo homo amendment”.