In All 5 Dimensions, the Hipster Millennial Stereotype is not a Serving Leader 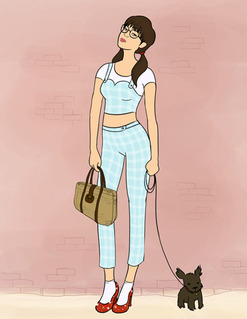 Last week, authors Kenneth Jennings and John Stahl-Wert dropped by the BK office for lunch and a talk. Their book The Serving Leader explores how a leader can do her or his job openly and fairly, recognizing that the position isn’t for them but for everyone. An important aspect they noted is that a serving leader should act in such a way that, when they move on, the organization is better off and not thrown into chaos.

They spoke about the book’s five ways for a leader to become the serving sort or, as Mr. Jennings put it, to help “change leaders who lead change.” After hearing these methods, I was struck by two unequivocal conclusions: serving leadership is incredibly important and the stereotype of hipster millennials (personified here by the choppy-banged Zola) is not a serving leader. Using the five dimensions of serving leadership detailed in their book, I explain why both of these are true.

1. Run to Great Purpose – It is the serving leader’s role to illuminate a group’s mission. Providing a “reason why” will motivate everyone involved to keep moving forward towards the group’s goal.

Zola, however, would rather just run to her bed and refresh her never-even-minimized Netflix tab on Chrome. It’s not mindless rot, though. She’s watching a documentary.

2. Upend the Pyramid – A serving leader must put herself or himself at the bottom of the pyramid instead of at a traditional high-up and elusive role. This switch releases the energy of the group and lets them bring out their talents.

As Socrates once said, “I am the wisest man alive for I know one thing, and that is that I know nothing.” Zola bears the burden of knowing that she alone understands that human achievement surrounding her is meaningless anyway. This, whether she likes it or not, automatically launches her to the top of the pyramid. Hopefully there are Apple products way up there.

3. Raise the Bar – Serving leaders are highly selective in choosing their teams and team leaders. This creates a culture of high achievement and keeps people accountable.

Zola does have the bar raised – the volume bar on her phone. She has a sick pair of Bose noise-canceling headphones and is therefore too busy listening to the newest Flume album to pick a team at all.

4. Blaze the Trail – Serving leaders educate and pass on skills to their team members, allowing obstacles to fall – as dominoes do – through all the tiers of leadership.

Hipster Millennial Zola would just roll her eyes at the idea of removing obstacles to performance. That sounds like it might involve some failure and troubleshooting, which in turn, require trying at something. Zola won’t actually try to do anything. Admitting one tried, of course, means caring about things, and that is SO overrated. I mean, look at her! She spent 30 minutes adjusting her factory-tattered denim vest to make it look like she just shrugged it on.

5. Build on Strength – Serving leaders must master the art of arranging people around them to contribute wherever they can do so the best. This optimizes performance and makes people feel the most useful, welcomed, and appreciated.

Zola would rather build her own gluten-free, local, and organic arugula and goat cheese flatbread, accompanied by a steaming mug of fair-trade imported chamomile tea. The steaming tea will nicely complement the vapors of derision that constantly surround her.

A note from Zola – Psst. toss me a chunk of that sourdough when no one is looking. Also, I don’t even like tea. It’s honestly just hot dirty-leaf water. Please save me.